A WORLD TURNED UPSIDE DOWN

In a World Turned Upside Down I argue that Mr Justice Jay's ruling against the Secretary of State for Transport is merely the tip of the iceberg.  Successive ministers have allowed the Motor Insurance Bureau and the motor insurance industry generally to write into our national law provision numerous exclusions and restrictions of liability that undermine Parliaments original concept of a providing a comprehensive scheme that guarantees that victims are fully compensated.  The comprehensive guarantee is supposed to apply regardless of whether the perpetrator is insured, under insured, completely uninsured or simply unidentified.  It is even supposed to protect victims from insolvent insurers. This is why our motor insurance is so costly.

Unfortunately successive ministers have given in to the powerful insurance lobby that has managed to qualify its liabilities with an increasing number of exceptions and exclusions of liability that undermine the original concept and which also breach the minimum standards of protection required under European law. The flaws provide the mulit-billion pound insurance industry with windfalls at the expense of the innocent victims whose interests the scheme is supposed to protect.

The article also examines why the Department for Transport was unable to explain its reasons for introducing exclusions of liability in the Uninsured Drivers Agreement 1999 when it was obvious that they were unlawful and why a large bureaucracy should claim to have no documentary evidence that might cast light on its insurer biased policies. Could it be that i insurance industry lobbyists are dictating the terms of our social policy to a credulous and compliant executive?

Click on the image below to access the article in full.  Reproduced here with the permission of the Journal of Personal Injury Law and its publishers Thomson Reuters. 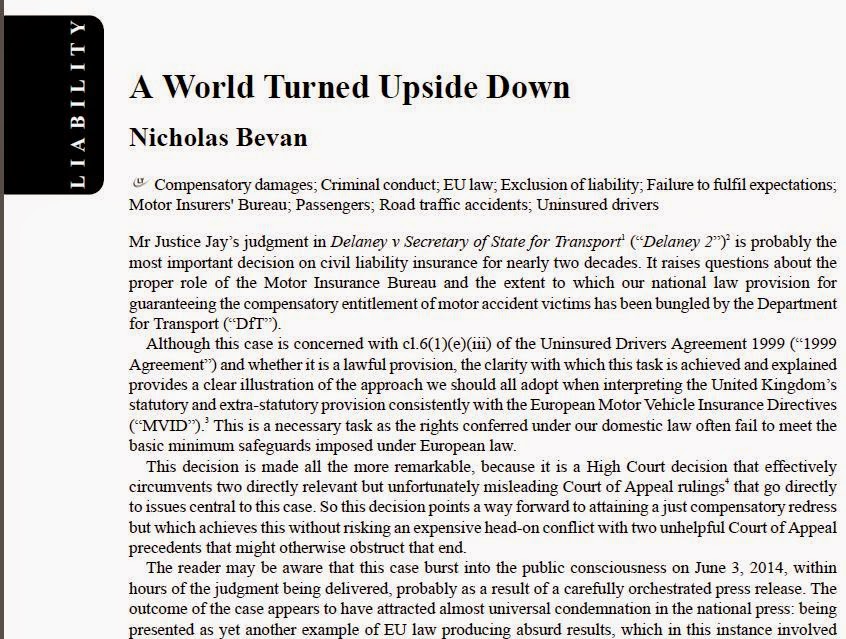