I recently joined the editorial team of this publication.  Today the first update that I have contributed to arrived. I have every reason to feel a little relieved as Malcolm Johnson, Black Lapthorn Claims, and Professor Birds were kind enough to give me a free reign to add a new section to Part 9 on the Motor Insurers Bureau. 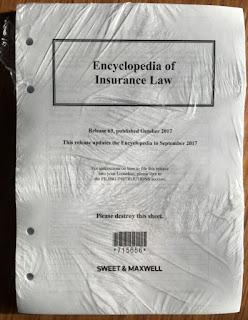 In Section 3 of Part 9 I advance what was a highly controversial argument.

I contend there that the numerous unlawful gaps in compulsory third party motor insurance which are non compliant with European law can be remedied by a new and direct route.  I argue that for as long as the UK is part of the European Union, accident victims can present a direct action against the Motor Insurer's Bureau based on the directly applicability of the Sixth (consolidated) Motor Insurance Directive 2009/103/EC.  I explain the far reaching implications for practitioners.

There was no precedent for this.  Indeed Mr Justice Flaux ruled in Byrne v MIB 2007 that the MIB not an emanation of the state and that the provisions of this directive's predecessors were not capable of direct effect against it. I have always been critical of that finding but no one has challenged it.

This has enabled motor insurers and and the Department for Transport to effectively ignore doing anything to remedy the systemic illegality that frustrates the ability of accident victims to invoke the rights conferred under the Motor Insurance Directive.  The case of Ellits & Wilson v MIB (unreported) of 11 May 2015 is a case in point. Here an illegal exclusion clause that purported to entitle the MIB to exclude its liability to compensate a child, who was injured as a passenger in his mother's car by a driver who gave false details at the accident scene. The sham justification given was that he had failed to report the incident to the police and a clause in the MIB's Untraced Drivers Agreement 2003 entitled them to reject the claim without further ado. Both the arbitrator and the appeal judge wrongly held that they were compelled to apply the MIB's exclusion of liability strictly, heedless of the fact that this exclusion was not permitted under EU law; regardless of the injustice caused.

Direct effect of the defectively implemented directives enables accident victims to circumvent this institutionalised injustice. It enables private victims to invoke the wording of the directive as though it were a statutory provision.

Earlier this month, the European Court of Justice ruled in Farrell v Whitty (C-413/15) that the Motor Insurers' Bureau of Ireland (which was set up on an almost identical  basis to the MIB in Britain) is subject to the direct effect of the relevant provisions in the Motor Insurance Directives.

The reasoning set out in the ruling makes it abundantly clear that the MIB is also bound by the direct effect of these directives, as I have argued.

What was a controversial and untested theory is now accepted as orthodoxy.

The wonderful Jan Miller at the New Law Journal, who has been a staunch supporter of my campaign for wide ranging reform in this area for years, will be publishing a two-part feature by me on this ground breaking ruling that has wide implications that extend far beyond motor insurance.  Part 1 comes out this Friday.