The Law Commission has published its initial response and recommendations in its three year project that reviews the legal framework necessary to accommodate the introduction on our roads of automated vehicles.

In my response to Question 18 of the Law Commissions’ preliminary consultation on Automated Vehicles (Law Commission Consultation Paper 240; Scottish Law Commission Discussion Paper 166) I argued the case for a wider review of the compensatory protection afforded to motor accident victims under the Road Traffic Act 1988 and the Consumer Protection Act 1978.

I explained that the no-fault liability under the Automated & Electric Vehicles Act 2018 failed to address the very real and immediate need for suitable cover for existing and near to market automation that present the gravest threat to the public.  Only advanced forms of automation (that have yet to be developed) or current levels automation operating within highly restricted environments qualify for the protection conferred under the 2018 Act.

In my answers to Question 7 and 18 I stress that section 145 of the Road Traffic Act 1988 only requires compulsory third-party cover to provide an indemnity against the policyholder’s personal liability.  This appears to breach the wider insurance obligation mandated under Article 3 of the Motor Insurance Directive 2009/103 (the Directive) that extends to require civil liability cover for defects in the vehicle, such as defective automation; that can result spontaneously, independently of the policyholder or user’s fault. My views on this lacunae in our national law provision have since been fully vindicated by the Court of Justice of the European Union (CJEU).  See: (Case C-100/18) Línea Directa Aseguradora, SA v Segurcaixa, Sociedad Anónima de Seguros y Reaseguros of 20 June 2019.

It appears that my concerns about to this particular infringement of the Directive, first raised by me in my consultation response to the Department for Transport’s 2013 consultation on the MIB Agreements, has been acknowledged by the Law Commission; albeit in oblique terms.

In the Law Commission’s 19 June 2019 paper: Summary of the Analysis of Responses to the Preliminary Consultation Paper it appears to recommend that the government undertake a general review of product liability for automated vehicles. 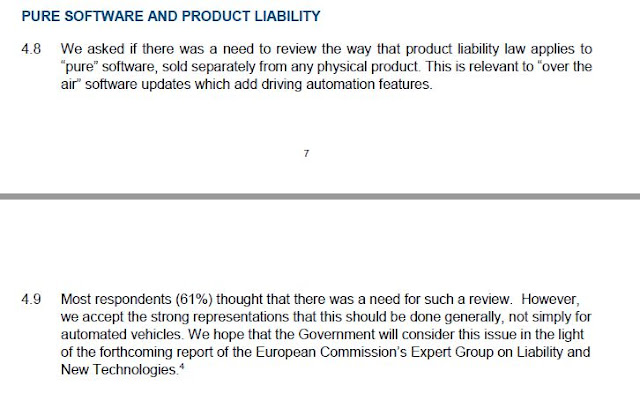 Unfortunately, the government has reneged on its commitment, made not only in the RoadPeace judicial review in 2018 but also in its own consultation paper on Vnuk in 2016, to bring the geographic scope of compulsory motor insurance under the Road Traffic Act 1988 into line with the wider remit of the Directive.  With a hard Brexit looking increasingly likely and given the government's manifest and obdurate disregard of EU law on this issue and its long standing refusal to fully implement various other aspects the Directive -  I am not holding my breath.

Fortunately however, victims who are injured by a  mechanical or software defect in a vehicle whose compensatory guarantee under EU law is frustrated by the responsible vehicle's insurer and / or the MIB refusing to compensate the claim on the basis that it is not a relevant liability (i.e. because the fault does not fall within section 145’s non-conforming scope) now have a new remedy.

Claimants can now invoke the direct effect of Article 3 of the Directive in an ordinary personal injury action against the MIB, see my blogs on the Court of Appeal ruling in MIB v Lewis 2019.  See also my New Law Journal articles which predicted this outcome: On the Right Road? in 2013, Putting Wrongs to Rights 2016; State Liability; betwixt and between Brexit in 2017 etc.

This new direct right allows the claimant to cite the wording of Articles 3 and 10 of the Directive as though they were fully incorporated into our national law, word for word, and to plead this in an ordinary civil / tort law action directly against the MIB.