The first instalment of my two-part feature in the New Law Journal was published on 12 July. It explains how the scattergun tactics employed by the Motor Insurers’ Bureau (MIB), in its futile appeal against Soole J’s first instance decision has proved to be a costly mistake.

The MIB has appealed Soole J’s finding that it was bound by the direct effect of Article 3 of the Motor Insurance Directive 2009/103 (the Directive) under EU law.  Article 3 prescribes the minimum standard of civil liability insurance necessary to deliver a consistent level of compensatory guarantee is conferred on third party motor accident victims throughout the EU and EEA.

In Lewis, the claimant was grievously injured when he was run down by an uninsured car in a privately-owned field, which location does not fall within the geographic scope of the Part VI of the Road Traffic Act 1988 that regulates the compulsory insurance requirement in the UK. The MIB had rejected the claimant’s application arguing that it had no liability under the Uninsured Drivers Agreement on the basis that its contractual liability under that agreement is coextensive with the statutory insurance obligation.

The first instance decision confirmed that the UK legislation infringed the Directive on this point.  Furthermore, it held that as it was bound by the Court of Justice of the European Union’s ruling in  (Case C‑413/15) Farrell v Whitty and Others (no 2) [2017], the MIB’s role in discharging the state’s obligation, imposed under Article 10 of the Directive, to authorise a compensating body to meet claims by victims of uninsured vehicles, pinned it with state liability to compensate victims wrongly denied the compensatory guarantee through insurance provision due to the government’s defective implementation.

The MIB’s unsuccessful appeal has served to compound its problems.

In the second instalment, to be published shortly, I consider the far-reaching implication of both findings. 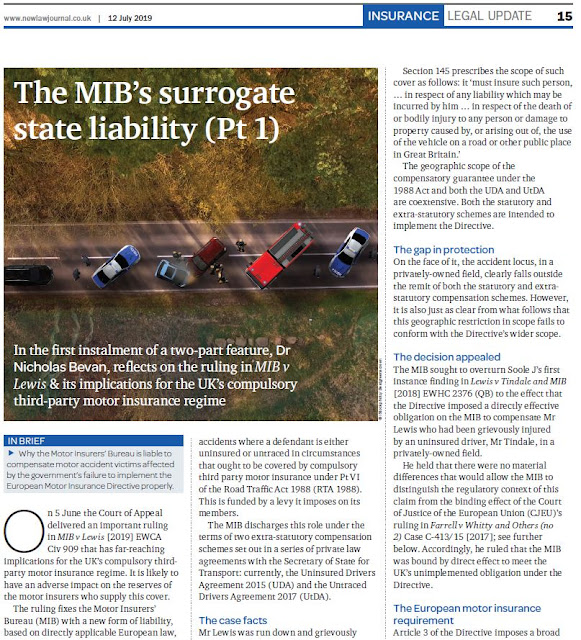