The second article, in my two-part feature on Lewis, was published this Friday in the New Law Journal.  The first instalment explained the reasoning behind the Court of Appeal’s two confirmatory findings: (i) that the Motor Insurers’ Bureau (MIB) is an emanation of the state; (ii) that Articles 3 and 10 of the Motor Insurance Directive (2009/103) have direct effect against it. The second article sets out some of the wide-ranging and potentially disruptive ramifications of this ruling. 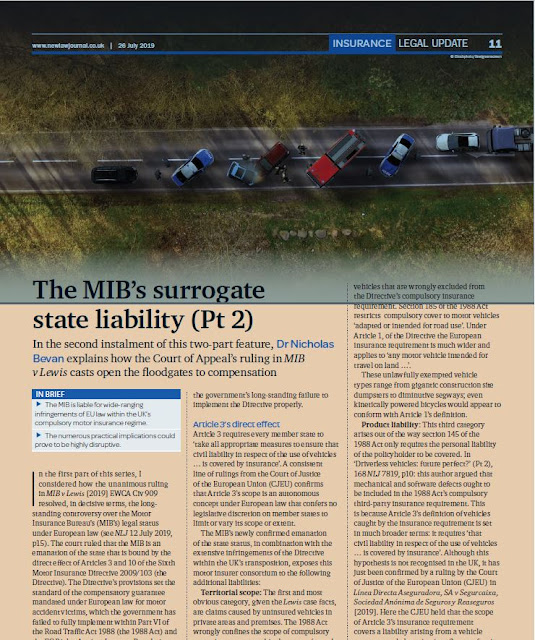 The key implications of the Lewis ruling are twofold.

First, the MIB is fixed with a vicarious form of liability to redress any gaps in the compensatory guarantee vouchsafed by the third-party motor insurance regime in the UK.  A key point that the commentaries I have read and heard all miss is that this is a general principle that has a wide and encompassing application. It is not confined to the facts of the case (e.g. claims featuring a motor accident on private land where the compulsory insurance provisions of the Road Traffic Act 1988 does not apply) but to all other instances where our national provision fails to fully implement the Directive.  The impact is major, reflecting as it does the egregious and wide-ranging infringements of EU law in the UK’s transposition of the Directive.  For example, uncompensated victims of motor accidents caused by mechanical and software defects, or unusual vehicles (neither of which scenarios are covered by the UK regime, in clear breach of EU law) can now pursue a direct action against the MIB. The EU law principle of equivalence requires that these claims are to be governed by the normal civil procedural rules that apply to conventional personal injury claims; not the disadvantageous provisions of the Uninsured Drivers Agreement 2015.

A second (major) collateral effect of Lewis is that the MIB Agreements themselves are now subject to a curative construction that bring their non-conforming provisions into line with the minimum standard of compensatory provision mandated under EU law. All this and more is explained in my New Law Journal Article, The MIB’s surrogate state liability (Pt 2).


Why did it take so long?


It took 12 years for the erroneous first instance findings in Byrne v MIB and the Secretary of State for Transport 2007 to be challenged in the UK. In Byrne, Flaux J (now Lord Justice Flaux) was not informed of consistent line of domestic authorities, which were determinative on the issue, concerning the correct approach to take when applying the Foster criteria for deciding whether a legal entity is to be treated as though it were part of the state and thus potentially subject to the direct effect of incompletely implemented rights conferred under a directive.  That same court was also badly misinformed on the facts. The MIB and the Secretary of State for Transport withheld an abundance of highly relevant material (documents and facts) that would, in my view, have established that the extensive control exercised by the minister over the MIB’s compensatory role and the special powers it enjoyed in this capacity; confer it with a special status as an emanation of the state.

These important issues were not pressed by the claimant at the time.  This was an entirely justifiable tactic in the circumstances of the particular case: the claimant team’s imperative was to focus its limited resources, in what had become an expensive litigation, to the key issues necessary to establishing one of two alternative successful outcomes. Its case concentrated on the near certainty that the court would find the government liable under an alternative ground based on Francovich state liability principles; where it succeeded ultimately in the Court of Appeal.

Unfortunately, Flaux J’s erroneous finding (on the alternative ground) as to the MIB’s state liability under Foster principles proved to be a dead-weight deterrent for numerous claimants thereafter (probably numbered in their thousands).

It took a ruling from the Court of Justice of the European Union in Farrell v Whitty (no 2) in 2018 to embolden a leading firm in an otherwise predominantly lack-lustre claimant personal injury sector, to bring the long overdue challenge in Lewis.  Farrell is on all fours with the domestic authorities on state liability that were completely overlooked eleven years before in Byrne.   Its finding on special powers coincided with my long-held view that the MIB’s compensatory role, which is funded through its imposition of a levy on all UK motor insurers as a precondition to authorised status in the UK, constituted a special power, which satisfied the criteria for emanation of the state status. The implications of Farrell (no 2) were as obvious as they were ineluctable.  However, it is striking that none of probably thousands of claimants were advised to challenge Byrne's evidently flawed findings on the MIB’s proper status, until Farrell (no2).

The 12-year hiatus of unjust outcomes from Byrne to Lewis neatly illustrates the sorry plight of individual claimants in our civil justice system.  Although the Civil Procedural Rules profess to impose equality between the parties, their failure to achieve this is abject: access to Justice is anything but equal.

This is partly due to the fact, as the Byrne case illustrates, that multi-national and state parties are free to bend the rules when it suits them, with apparent impunity. Costs sanctions imposed for unreasonable conduct is a worthwhile risk where a distorted outcome might result in a windfall of £millions.  The multi-£bn motor insurance sector plays a vital and largely beneficial role in our society. Unfortunately, its powerful lobby has distorted our national law provision for compulsory insurance by obstructing much needed reform, over many decades, and it is able to invest disproportionate sums in civil actions to achieve partial and unmerited outcomes that serve its strategic aims. Whilst successive governments are responsible for excessive court fees and the abolition of legal aid which drastically curb access to justice, the judiciary have also contributed to the problem which deters many if not most private citizens from challenging abuses of power. Rupert Jackson’s dogmatic proposals for curbing legal costs through arbitrarily derived fixed fees, Draconian procedural penalties, and though the imposition of arcane cost recovery principles (such as the proportionality principle that imposes an arbitrary cap on recoverable costs in a Procrustean fashion) has made civil litigation an unjust process where disparities in resources is routinely exploited by wealthy institutions at the expense of private litigants.

As a solicitor of many years standing it has also been disheartening to witness the recent startling decline in the quality of the Supreme Court’s judgments in this area. I can only hope that the Cameron and Pilling rulings in February and March this year, which I appear to be alone in robustly criticising (see my New Law Journal articles and my earlier posts in this blog) are anomalies that will never be repeated. It is also equally startling to note that none of my fellow commentators and law reporters featuring these two appalling rulings recognise the blatant misstatements of fact and law within them.

The findings that (i) the 1988 Act fails to conform with the unrestricted geographic scope of the Directive, (ii) that the MIB is an emanation of the state and (iii) that both Articles 3 and 10 of the Directive have direct effect against it, will all endure as retained EU law under s4(1) of the EU Withdrawal Act 2018. Accordingly, individual claimants will be able to invoke the direct effect of these findings beyond a Brexit notwithstanding that abolition of the primacy of EU law under s5.

It remains to be seen where the courts will draw the line on the wider implications of this ruling, especially where a domestic non-conforming provision has not yet been recognised as such on Brexit. It is also by no means certain that claimant law firms will exploit these newly confirmed rights to the full extent.