Inadequate safeguards for minors and the mentally handicapped

The Association of Personal Injury Lawyers have just published my exposé on the lack of proper safeguards afforded to children and mentally incapacitated victims by insurers who approach road accident victims direct as well as those who are unlucky enough to be injured by an unidentified or 'hit and run' driver. 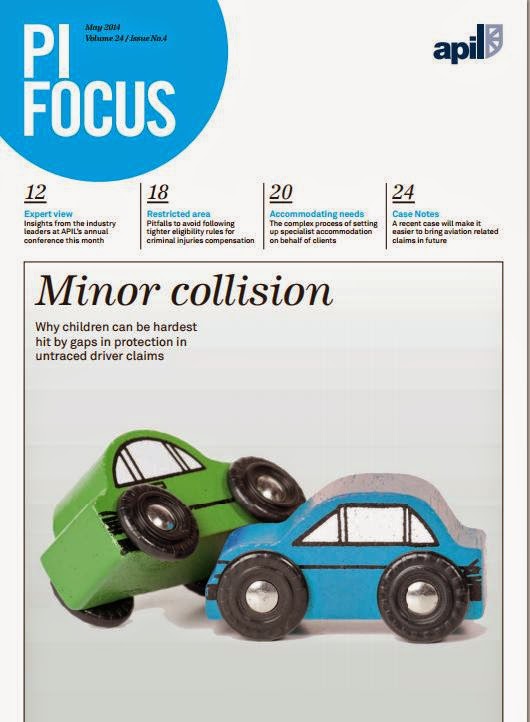 The Association of Personal Injury Lawyers is a fabulous organisation which campaigns for fair treatment and justice for accident victims, to help put their lives back on track.  Please support it in any way you can.

This includes a response by a  spokesperson for the Motor Insurers Bureau. It indicates that the MIB untraced drivers scheme was given a clean bill of health in the High Court by Mr Justice Hickinbottom in Carswell v Secretary of State for Transport & the MIB [2010] EWHC 3230 (QB), and so it was.  However, I have two observations to make.  Firstly, Carswell was a case where the deceased's family were superbly represented by the redoubtable Andrew Richie QC and it had nothing whatsoever to do with injured minors or mentally handicapped victims.  My second point is that the European Commission is currently investigating a number of breaches of Community law where our national law provision fails to properly implement the minimum standards of protection imposed under the Motor Insurance Directives.  The Commission's concerns embrace both the Uninsured and Untraced Drivers Agreements.  So watch this space!

Posted by Dr Nicholas Bevan at 15:01 No comments:

Accidents abroad within the European Union

Leading national weekly law journal, the New Law Journal, has just published my latest feature, Where to sue?’.  This article reviews the European Regulations that govern jurisdiction and applicable law in cross border road traffic accidents within the European Union. It then moves on to consider some recent developments that make it easier to act for clients injured abroad within the EU.  Nice to have some good news to impart for a change!

Also, I am delighted to note that Robert Weir QC has succeeded, yet again, before the Court of Appeal.  In my New Law Journal article I reported on the excellent outcome in Wall v Mutuelle De Pitiers Assurances [2013] EWHC 53 (QB) in which he represented the claimant.  The Wall case involved an English motorcyclist who was injured during a motoring holiday in France.  Mr Justice Tugendhat ruled that it is our Civil Procedure Rules, and not French civil procedure, that should determine the way the evidence is prepared in a claim like this.  The French insurers didn’t like our more elaborate Anglo-Saxon approach and appealed.  In arguably the most important ruling in this area since Harding v Wealands [2007] 2 A.C. 1, the insurer’s appeal was dismissed and unanimously so: by Longmore, Jackson and Clarke LJJ.  It hard to imagine a more cerebral tribunal!  The judgment in Wall v Mutuelle De Pitiers Assurances [2014] EWCA Civ 138 is freely available on BAILII.

The European Commission are considering further reforms to make it easier for victims to bring proceedings in their local courts following a road accident in a foreign member state.  There is even talk of introducing an exception to Rome II so that the applicable substantive law would be that of the local court where the victim is domiciled. Somehow, I think that is unlikely to be achievable in the foreseeable future but do watch this space for other impending developments.

The article refers to the following cases:

It also refers to the following:

Posted by Dr Nicholas Bevan at 14:12 No comments:

2 front covers in one week!

I am delighted to have two articles published that also feature on the front cover of two law journals, all in the same week!

More on the articles shortly.
Posted by Dr Nicholas Bevan at 13:05 No comments: