The Department for Transport is responsible for systemic illegality


In the first of my latest series of New Law Journal articles I explain why our primary legislation and our other national law provision for guaranteeing the compensatory entitlement of motor accident victims is so badly flawed.

Successive ministers have condoned numerous defects that allow motor insurers to evade their liability to fully compensate third party victims, whom the entire edifice of compulsory third party insurance is supposed to protect.  (see my earlier blog Action Not Words)  These loopholes undermine the original Parliamentary intention of the 1930 legislation that introduced this concept and they also infringe the European Directive (2009/103/EC) on motor insurance, which is simpler, clearer and fairer to all concerned than our partial and defective national law implementation.

The problem effects: The Road Traffic Act 1988, The European Communities (Rights Against Insurers) Regulations 2002, the various extra-statutory compensatory schemes managed by the motor insurers' consortium, the Motor Insurers Bureau, currently: The Uninsured Drivers Agreements 1999 and 2015 and the Untraced Drivers Agreement 2003 (as amended).  Even elements of our common law is incompatible with the simple precept that the expensive motor insurance we pay for should be fit for purpose. This illegality is so prevalent that much of our national law provision in this area cannot be taken at face value.

This deplorable state of affairs is the subject of an ongoing judicial review  run by Leigh Day.

Jan Miller, my wonderful editor at the New Law Journal, has allowed free access to my latest article.

In my next articles I explain that many of the problems caused by the minister's failure to properly implement European law can be redressed by arguing for the Directive to have direct effect against the MIB; not just where its private law arrangements with the minister breach this European law but also for some infringements in our primary legislation. This involves disturbing well established precedent and various misconceptions. So watch this space! 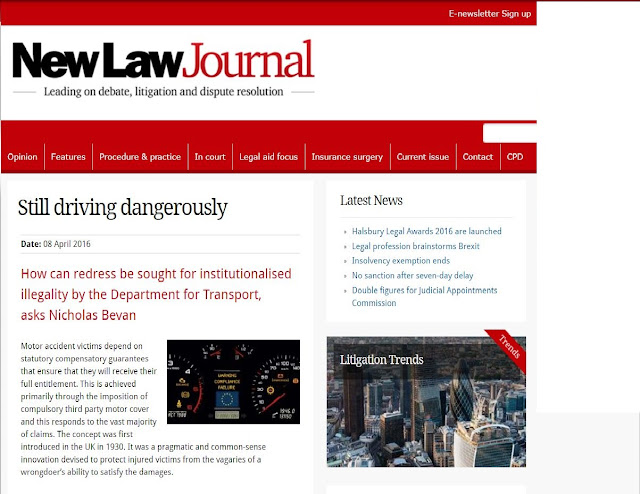 Posted by Dr Nicholas Bevan at 11:12 No comments: