Book now via the Association of Personal Injury Lawyers at: https://www.apil.org.uk


In a break with 73 years of jurisprudence, the Court of Appeal has fixed the UK motor insurance industry’s’ privately-owned consortium, the Motor Insurers’ Bureau, with a new autonomous legal obligation to compensate outside the parameters of the Road Traffic Act 1988.

Another important consequence of this ruling is that MIB Agreements are now subject to an EU law conforming interpretation; applying EU law authorities that effectively overrule an earlier House of Lords ruling to the contrary.

Serious deficiencies in the Supreme Court’s rulings in Cameron v Liverpool Victoria Assurance [2109] and Pilling v UK Insurance [2019] may be flagged up but a more detailed consideration will be covered in a separate webinar, currently under preparation. 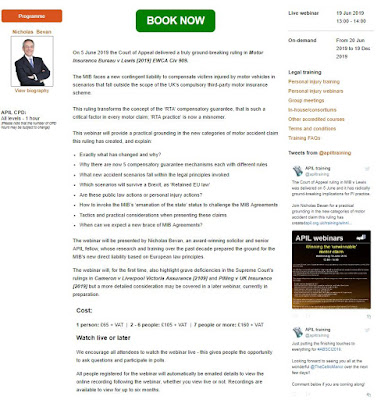 The Court of Appeal has ruled that:

These findings fix the MIB with a liability to compensate motor accident victims whose compensatory entitlement ought to be guaranteed through compulsory third party motor insurance but who are not due to the UK government’s failure to properly implement the minimum standard of compensatory protection required by the Motor Insurance Directives.

The MIB faces potentially hundreds of claims by individual motor accident victims whose compensatory entitlement have been obstructed or denied due to the government’s longstanding failure to implement basic EU law requirements for motor insurance.

The MIB’s appeal against the first instance decision in Lewis v Tindale & MIB [2018] EWHC 2376 (QB) was resoundingly dismissed.  This is an unanimously endorsed ruling.  In presenting the only reasoned judgment, Lord Justice Flaux, rejected the MIB’s numerous arguments one after the other.

The Court of Appeal has ruled, in decisive terms, that not only does the MIB’s compensatory role under the Uninsured Drivers Agreement 2015 and the Untraced Drivers Agreement 2017 make it an emanation of the state in this context, but it is also pinned with liability to compensate motor accident victims who have been wrongly denied the compensatory guarantee mandated by Articles 3 and 10 of the Motor Insurance Directive 2009/103 due to the government’s  failure to properly transpose its requirements within the Road Traffic Act 1988 and under its private law agreements with the MIB.

Flaux LJ’s involvement might strike some as poetic justice for the MIB, since this ruling overturns his earlier decision in Byrne v MIB [2007] EWHC 1268 (QB) in which he had previously ruled that (i) the MIB was not an emanation of the state so that (ii) the provisions of the Motor Insurance Directives could not have direct effect against it. I have argued over several years, in my New Law Journal articles, that the Byrne judgment was wrong on these points.  First in February 2013 later in more detail in my two-part feature, Putting wrongs to rights, 27 May and 3 June 2016.  I did so again, following the Court of Justice’s ruling in Farrell v Whitty No. 2 (Case C-413/15) [2018] in State Liability: betwixt and between Brexit (Parts 1 and 2) 27 October 2017 and 3 November 2017.  I inferred from the judgment in Byrne that information relevant to the MIB’s close working relationship with the government was withheld from the court and I asserted that the learned judge was also misinformed on the proper approach to determining whether a body is an emanation of the state.  It was noticeable at the appeal hearing in Lewis that Flaux LJ was extremely well informed, which was evident from his timely and apposite interventions. 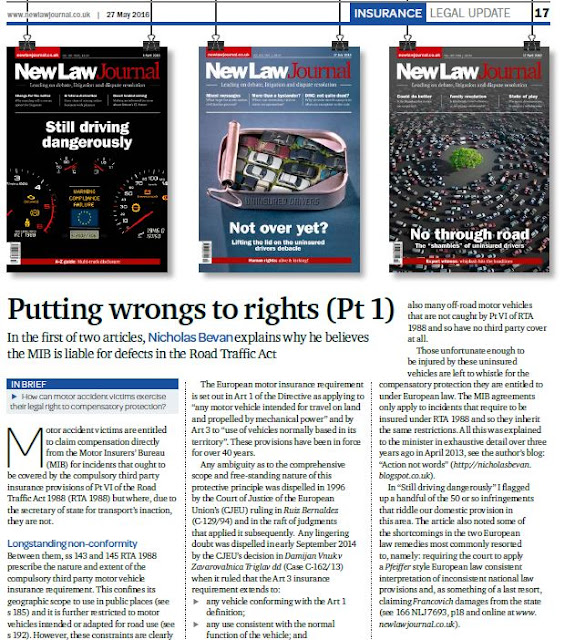 I will be presenting a lunchtime webinar on 19 June 2019 for the Association of Personal Injury Lawyers on the wide-reaching implications of this important ruling.

The MIB’s exposure to liability extends far beyond the terms of its private law agreements with the Secretary of State for Transport; beyond even the governments failure to ensure that compulsory third party motor insurance extends to private land: it opens up new areas of claim previously thought to be untouched by third party motor insurance and the Road Traffic Act 1988.

I understand that the Court of Appeal have already refused the MIB leave to appeal.  However, the MIB have indicated that they intend to apply to the Supreme Court for permission to appeal, regardless. I think the MIB would be wise to think twice about that.

If the MIB plan to pursue their empty technical argument that Articles 3 and 10 of the Motor Insurance Directive are insufficiently clear and unconditional to qualify for direct effect then that is likely to oblige the Supreme Court to refer the issue to the CJEU for a preliminary ruling under Article 267 TFEU. The autonomous nature of the EU law motor insurance obligation requires this; it is not something that lies within the Supreme Court’s discretion.  The European Commission and the CJEU are well aware of the UK’s extensive non-conformity with EU law in this area and it so may result in a crystal clear exposition of just how extensive the MIB’s liability is.

The UK remains the subject of a wide-ranging infringement complaint that has lain dormant following the 2016 Brexit referendum.  However, any Article 267 reference is likely to be expedited in the face of an impending Brexit.

Posted by Dr Nicholas Bevan at 15:42 No comments: 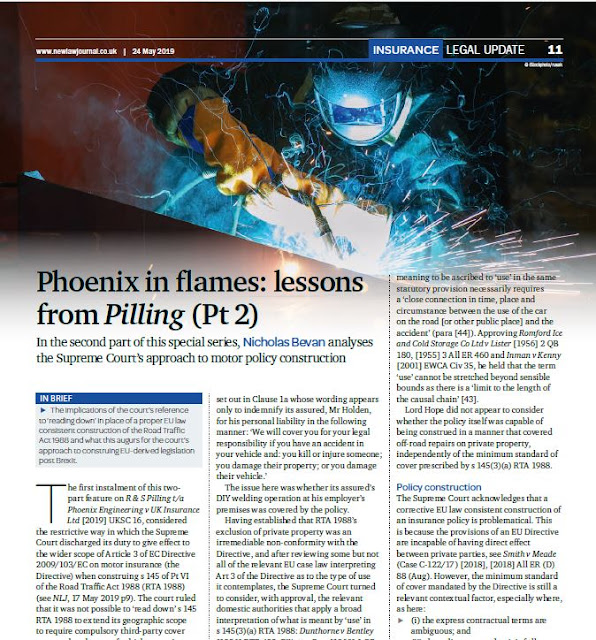 Posted by Dr Nicholas Bevan at 14:18 No comments: