Phoenix in flames: lessons from Pilling

The first installment of my mini-series on the Supreme Court's decision in Pilling is published in this week's edition of the New Law Journal (17th May 2019). I examine the court's approach to the consistent construction of the Road Traffic Act 1988 and find it wanting. 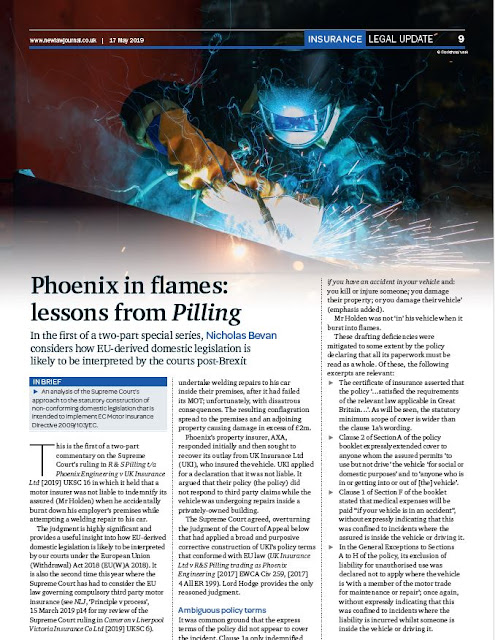 In next week's installment I consider the Supreme Court's approach to policy construction.
Posted by Dr Nicholas Bevan at 10:40 No comments:

At  APIL’s 2019 annual conference I attended Dominic Clayden’s update on the latest developments within the Motor Insurance Bureau and the new IT platform it is developing to handle personal injury claims by unrepresented members of the public.

After hearing the Motor Insurers Bureau’s new CEO declare that the MIB was the Ministry of Justice’s delivery partner for developing the new portal and on viewing his impressive powerpoint organisational schema that reveals the impressive range and variety of different public services it discharges on behalf of the government, I expressed puzzlement that the MIB still denies its status as an emanation of the state in the ongoing appeal in Lewis v Tindale & MIB.  The appeal was heard last week.

I suggested that the MIB has become a mini-ministry responsible for a significant proportion of the Department for Transport and Ministry of Justice’s responsibilities imposed under the European Motor Insurance Directives.  I invited him to consider reforming the constitution of this motor insurer consortium, given its important public service role.  I suggested that it should co-opt onto its board certain special interest groups, such as RoadPeace, and to make the organisation more open and accountable to the general public, who fund its operations through their insurance premiums.

I was not surprised that Dominic Clayden should reject my suggestion out of hand.  However, I was surprised by the lame excuse he gave.  He claimed that its governance was its own private concern and that if claimants choose to use its services or not then that was a matter of choice for them.  This is as obviously wrong as it is disingenuous.

One may choose to go shopping to one of several stores; claimants do not choose to be injured by another’s negligence, nor does the invocation of their legal entitlement to compensation by the only legally recognised route to redress amount to a question of  choice; it is a matter of compulsion; not free choice.

Last week I attended the annual conference of the Association of Personal Injury Lawyers, of which I am a senior fellow.

It was a pleasure to join the panel to discuss ‘The Impact of Brexit’ with Katherine Deal QC of 3 Hare Court; Sarah Crowther QC of Outer Temple Chambers; Chris Deacon from Stewarts solicitors; Simon Davis, vice president of the Law Society, and Dominic Clayden the new CEO at the Motor Insurers’ Bureau.

Prior to this, Dominic Clayden presented an update on the latest developments within the MIB and the new IT platform it is developing to deal with personal injury claims by unrepresented members of the public.  He revealed that the insurance industry is investing £15m in this new online portal.  This online claims platform will be linked to a call centre.

Although much is still unknown about its precise workings, the MIB has a target of April 2020 for the system to go live.  The new portal’s launch is intended to coincide with the implementation of new reduced scale tariffs on the damages paid for soft tissue injuries sustained in road traffic accident claims, under the Civil Liability Act 2018. It is also intended to facilitate claims by litigants in person once the government’s extends the scope of the small claims track for motor claims valued up to £5,000, also planned for April 2020.

This new portal and these reforms will effectively remove, on some estimates, at least half of the present volume of road traffic accident claims from the current portal where solicitor’s receive modest levels of fixed costs from the insurers of an at-fault party. This will effectively divert a substantial quantity of routine low value civil liability litigation from solicitors practices.  Many view this as the final turn of the screw for the bulk personal injury claims sector that began with the civil justice reforms in 2013.

Listening in to a seminar that updated the membership on the progress being made on developing the new claims portal, I was reminded of the scene from Monty Python’s ‘Life of Brian’ where Michael Palin, solicitously instructs each participant: ‘Straight out; line up on the left, one cross each…’

Posted by Dr Nicholas Bevan at 17:42 No comments: 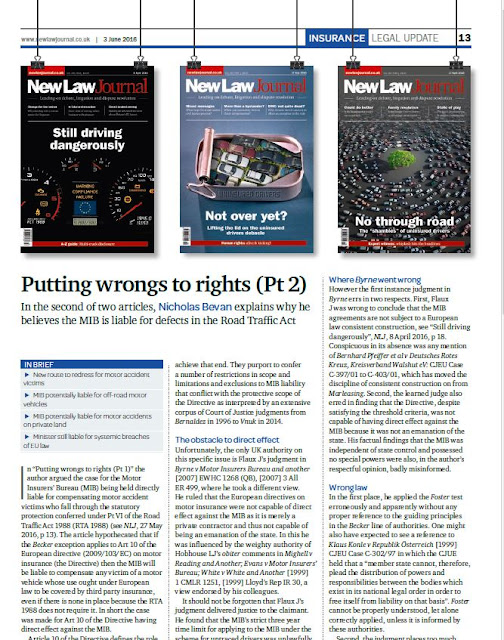 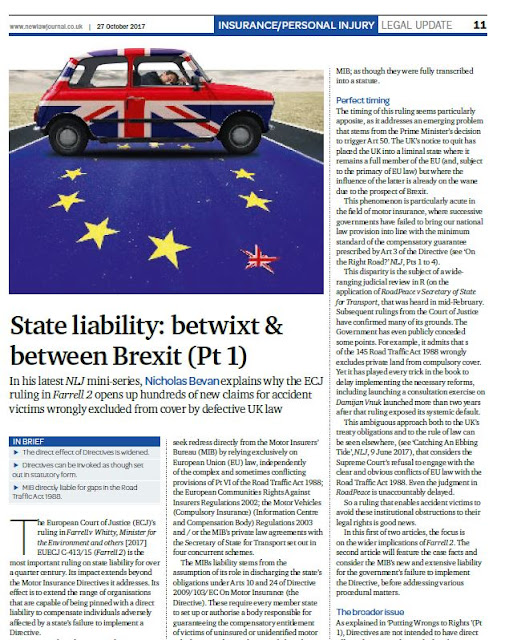 Posted by Dr Nicholas Bevan at 09:46 No comments:

The MIB's appeal against the landmark first instance decision in Lewis v Tindale & MIB is listed for a 1.5 day trial in the Court of Appeal in mid May this year.

The Court of Appeal's decision will be something of a moment of truth for me as the first instance decision was largely based on my earlier research.  See my earlier posts and my New Law Journal articles, over several years, that have advocated for the MIB's liability to compensate victims falling through the gaps left by the government's longstanding failure to implement the EU Directive 209/103/EC on motor insurance properly.

The webinar will consider the Court of Appeal's judgment and, if time, it will also explain why two recent Supreme Court rulings are badly flawed and what remedies are available. 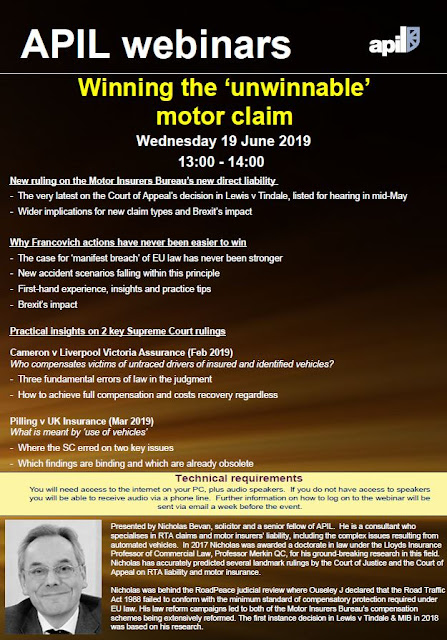 Posted by Dr Nicholas Bevan at 14:51 No comments:

This is the second time in as many months that five justices of the UK Supreme Court have misdirected themselves on European law and reached a decision based on a line of reasoning that fails to withstand close scrutiny.

The Pilling case featured a a dispute between a motor insurer and a public liability insurer as to who was liable to indemnify the owners of business premises for an extensive fire.  The conflagration was caused by an attempted DIY welding repair to an employee's privately owned car.  This set his car ablaze.  The fire then spread; gutting the employer's business premises. The key issues were:


The Court of Appeal held that  the motor insurer was liable indemnify the claim but the Supreme Court disagreed; unanimously.

As to the first issue, the Supreme Court misapplied the EU law that governs how national courts should set about construing UK implementing law, in its approach to interpreting the wording of the Road Traffic Act 1988.  This Act regulates compulsory third-party motor insurance in the UK and it is supposed to fully implement EU Directive 2009/103/EC on motor insurance. The Supreme Court also failed to consider two recent and highly relevant (and binding) Court of Justice rulings on ‘use of vehicles’ or to note that there is also an ongoing reference to the Court of Justice on a similar point.

On the second issue, the rationale for the three step approach devised by the Supreme Court to policy construction is badly flawed.

The first instalment of my two part feature criticising this decision is due to be published in the New Law Journal next week.

The Pilling ruling also has a wider significance.  It provides a useful insight into how ‘EU-derived domestic legislation’ is likely to be interpreted by our courts under the EU Withdrawal Act 2018.

Posted by Dr Nicholas Bevan at 14:24 No comments: