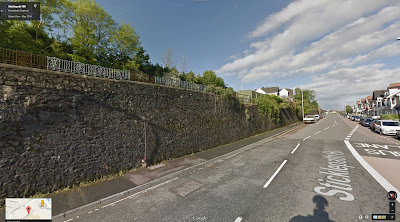 [Posted as a supplement to my Motor Liability Update 2015 course notes]
Posted by Dr Nicholas Bevan at 20:03 No comments:

Daniel Easton, of Leigh Day & Co and I have been delivering training on asbestos related disease claims for the Association of Personal Injury Lawyers for several years now.  So it is gratifying to still get really positive feedback from the delegates.


My heartfelt thanks for these generous comments.

Daniel and I will be presenting the same course in London on 30 June 2015. There are still a few seats spare so book now before they go.  Please contact the ever wonderful

I have lots of new slides and notes on the latest Supreme Court ruling in Zurich v IEG 2015 UKSC 33. For once, it is really good news for victims of the invidious and almost always fatal disease that is mesothelioma. 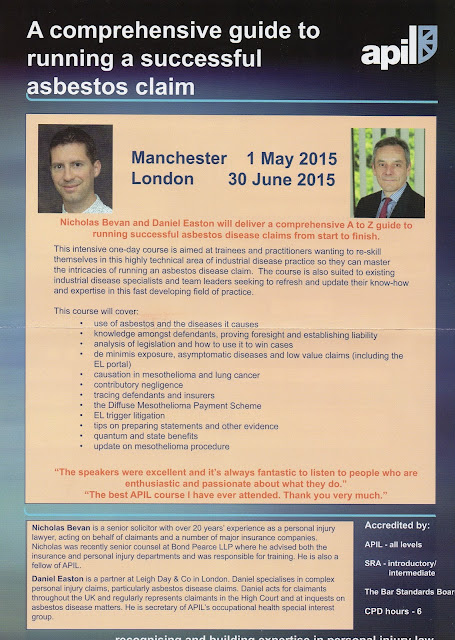 Posted by Dr Nicholas Bevan at 15:39 No comments:

On 20 May the Supreme Court delivered a tour de force judgment that is a ‘must read’ for anyone who has any pretensions to expertise in asbestos related disease claims.  The case features a Guernsey based company and the way that independent jurisdiction affects an employer’s entitlement to indemnity from one of its insurers for the claim and costs of settling a former employee’s claim arising out of exposure over a much longer period than was covered by that insurer.

However, the Supreme Court Justices not only reappraise the vexed issue of the what exactly the House of Lords had intended to achieve in Fairchild v Glenhaven Funeral Services Ltd [2002] UKHL 22 when it modified the normal 'but for' causation rule in tort law in mesothelioma claims but it went on review the various reinterpretations of that rule by both The House of Lords and the Supreme Court and to deliver a reasonably clear exegesis of the rule as it has now evolved.  If that were not enough, it goes on to export the public policy that informed the Fairchild decision to the contractual liability of an employers’ liability insurer to its insured.  In doing so it (i) bolsters the compensatory entitlement of the employer’s mesothelioma victims, so that the employer is fully indemnified and (ii) mitigates that draconian effect by conferring on the an insurer a right to seek a contribution.

The Supreme Court’s ruling in Zurich v IEA is of seminal importance.  Much of its ratio is directly applicable to claims in England and Wales.

The Zurich judgment is particularly significant in the following respects:

First, as already indicated, it reviews the key authorities from the House of Lords in Fairchild and Barker, and the Supreme Court in Sienkiewicz and Durham and it provides further guidance and insights on these key decisions that have seemingly been the subject of endless reinterpretation and analysis.  Hopefully we now have a definitive explanation of what is known as the Fairchild rule, one that seems that reasonably clear and unequivocal.

Secondly, it has reinterpreted the significance of the House of Lords ruling in Barker v Corus UK Ltd [2006] UKHL 20, which remains good law in England and Wales save to the extent abrogated by s3 Compensation Act 2006 – and this has implications for lung cancer claims – so that if Mr Justice Jay’s decision in Henegham v Manchester Dry Docks [2014] EWHC 4190 (QB) is upheld, apportionment of damages will continue to apply.

Thirdly, it confirms and explains the innovative approach introduced in Durham v BAI (Run off) Ltd [2012] UKSC 14 to the construction of insurance contracts:  importing the policy considerations forged in Fairchild into a purposive reinterpretation of employers liability contracts so as to give effect to the public policy need for insurance policies to respond to claims, seemingly whatever the actual terminology used in the contract.

Fourthly, it fixes an employers’ liability insurer who was on risk in any one year (during potentially many years of exposure) with a liability to indemnify the full amount of that employer’s liability to compensate the mesothelioma sufferer.

Fifthly, where liability to indemnify is established, the Supreme Court has announced a new and radical common law innovation (to do justice to the insurer): the insurer will enjoy a proportionate right of contribution from (i) any other insurer and (ii) the policyholder pro rata for any period of uninsured exposure.

I provide a detailed analysis of this case in BPILS Bulletin issue no 118, which will be in print shortly.

Link to the Supreme Court Judgment in Zurich v IEG: https://www.supremecourt.uk/cases/uksc-2013-0057.html.  The judgments, all of them, reward careful study.  This is our common law working at its best.
Posted by Dr Nicholas Bevan at 15:16 No comments: