In Lewis v Tindale, MIB and SoS for Transport Mr Justice Soole held that the privately owned motor insurance consortium, the MIB, is fixed with state liability to compensate  accident victims who have been unlawfully excluded from the compulsory third party motor insurance regime imposed under  Part VI of the Road Traffic Act 1988.

This decision overturns Byrne v Motor Insurance Bureau in 2008 and, prior to that decision, a long held assumption that the MIB's liability for accidents occurring in the UK is exclusively defined by its contractual  obligations with the Secretary of State for Transport.

I have consistently argued, over many years, that the leading UK authorities on this issue were erroneous as they were based on the wrong application of European law on state liability and compounded by misleading and inadequate factual disclosure about the MIB.  The MIB has been liable for the UK government's failure to regulate the motor insurance industry in this way, for at least a decade but few were prepared to countenance this. My views were vindicated recently by the European Court of Justice's ruling in Farrell v Whitty (No.2) (Case C-413/15) [2018] 3 WLR 285 concerning the Irish Republic's MIB.  The Lewis decision shows that our profession has finally woken up to this important new legal remedy.

The Lewis decision has far reaching, if potentially short-lived, implications.  It allows injured victims (affected by the UK government's failure to reform its statutory provision for third party motor cover) to bring it into line with the minimum standards of protection required under European law to sue the MIB direct.

This amounts to conferring an entirely new cause of action against the MIB. The claim depends on European law principles which, due to the primacy of European law, override the UK's defective implementation of EC Directive 2009/103/EC on motor insurance - at least, for as long as the UK is part of the EU.


Compulsory third party insurance was first introduced in 1930 in response to a growing problem.   Motor vehicles were becoming increasingly affordable and as motoring was no longer the reserve of the wealthy injured victims were exposed to the risk that individuals adjudged to be responsible for their injury could not be relied on to possess sufficient resources to satisfy the judgment. Rather than incept a state funded compensatory scheme, the government chose to compel vehicle owners and users to take out insurance against their personal liability to third parties. Compulsory insurance was introduced under the Road Traffic Act 1930.

In 1945 the motor insurance industry agreed to set up a compensatory body, the MIB, to meet claims by victims of uninsured drivers.  Every motor insurer agreed to become a member of the MIB and to fund its compensatory role and this was set as a precondition of their authorise status.  This motor insurance consortium has, over the years, assumed various other associated roles, including compensating victims of hit and run accidents as well as victims of foreign accidents within the European Union where the foreign insurer has failed to deal with the claim or where the vehicle responsible is uninsured or unidentified.

Unfortunately, the  motor insurance lobby and the MIB have combined to obstruct many necessary reforms to bring the statutory provision for compulsory motor insurance and the MIBs compensatory role up to date. The Department for Transports ineffective regulation of this area has allowed this multi-billion pound special interest group an alarmingly unconstitutional degree of influence at the general public's expense.  Motor insurance products are still hedged with unlawful exclusions and restrictions in cover and, compared with their continental competitors, they offer poor value for money as well as resulting in considerable legal uncertainty and unpredictable outcomes.  This has led to a growing disparity between the minimum standard of motor insurance cover required under European law and the insurance products sold in the UK.


The reasons why European law empowers private citizens to sue organisations such as the MIB direct are twofold.  First, it is intended to prevent member states, such as the UK, from shirking their Treaty obligations and / or seeking to undermine the effectiveness of legal rights conferred on individuals under European law by outsourcing their responsibilities to third party agencies and thus washing their hands of responsibility.  It can be viewed as a measure of indirect self-enforcement: one that relies on national courts to adhere to the rule of law to bring errant governments to account; even if the primary defendant is an emanation of the state, as opposed to the minister of state ultimately responsible for the illegality. Second, it is to ensure that individuals are able to invoke rights wrongly denied them by their state's unlawful actions.

Mr Lewis was seriously injured by an uninsured driver in a field.  The MIB, rejected the claim on the basis that it was only liable to meet an unsatisfied judgment  where the incident involved is one that is subject to the compulsory insurance requirement under UK law.  It relied on the terms of the scheme it had negotiated with the Secretary of State to this effect.  However, European law does not permit member states to exclude private property from their compulsory motor insurance schemes.

The judge held that because the MIB was performing a public service and had special powers for this purpose beyond those exercised by ordinary individuals - it was to be treated as an emanation of the state and this pinned with the state's liability to compensate the victim.  He came to this conclusion by applying well established European law principles.

Hitherto, it was widely understood by most legal professionals that the MIB could not be held to be  liable in this way and reliance was placed on Mr Justice Flaux's ruling on this point in Byrne v Motor Insurance Bureau in 2008.  It is satisfying to note that the learned judge's ratio  closely follows my dissenting line of reasoning and the legal authorities I have relied on to support my thesis, as published in my various New Law Journal articles and also in this blog.

Follow this link for a transcript of the Lewis judgment: https://www.bailii.org/ew/cases/EWHC/QB/2018/2376.html


The decision confirms a new right of action derived from European law for the benefit motor accident victims injured in the following scenarios :


Unfortunately, as this right is based on European Law and the primacy of that law, accident victims will probably lose this new right on 29 March 2019 when the UK leave the EU. 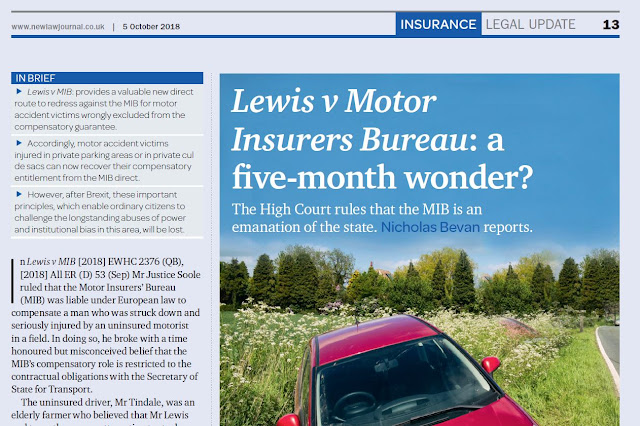 Posted by Dr Nicholas Bevan at 13:50 No comments: