Do you agree that:

(1) All vehicles which "drive themselves" within the meaning of the Automated and Electric Vehicles Act 2018 should have a user-in-charge in a position to operate the controls, unless the vehicle is specifically authorised as able to function safely without one?

2. I recommend a diametrically opposed approach for the high and advanced levels of automation anticipated by the AEVA 2018:  The imposition of a user in charge should be the exception and not the rule.

3. I suggest that the presence of a user-in-charge be largely confined to vehicles equipped with SAE L4 automation (where the ability to minimise any risk to safety can be addressed, progressively, as much through external factors, such as its operational design domain [ODD] as by product design.  Indeed, at SAE L4 an automated vehicle’s ODD may often prove to be the decisive factor in determining it’s safety, particularly where has a relatively rudimentary level of ADS.

4. The role of a user-in-charge, as proposed, is largely antithetical to the concept of full automation at SAE L5.  However, it is conceivable that a user-in-charge might be justified at SAE L5 in exceptional circumstances: as where, for example, dangerous substances are being transported by a fully automated vehicle. However, in such a scenario, the need for a user-in-charge would less attributable to the innate characteristics of the automated driving system (ADS), as opposed to its intended use.

My answer then goes into considerable detail under two headings, the first considers fully automated vehicles subject to the Society of Automotive Engineers (SAE) classification at Level 5, before considering the implications for vehicles equipped with SAE Level 5 high automation.

My basic premise is that we should ensure that safety is guaranteed through safe design, manufacturer and testing.  We need to learn from history, e.g. the Red Flag Acts, and avoid imposing a human presence if it is not needed as this is likely to undermine the trans-formative potential of this new technology.  That said the concept of imposing a user-in-charge may well have a role to play, as an exception to the rule.

(2) The user-in-charge:
(a) must be qualified and fit to drive;
(b) would not be a driver for purposes of civil and criminal law while the automated driving system is engaged; but
(c) would assume the responsibilities of a driver after confirming that they are taking over the controls, subject to the exception in (3) below?

1. Subject to the qualification given above, Yes to (2) and (3)
2. Additional and officially approved training and testing of the user-in-charge’s role and clarification of the standard of care to be expected of a user-in-charge is also essential.

I am happy to consider sharing my detailed arguments, if so requested.

The consultation deadline expires on 8 February.

Posted by Dr Nicholas Bevan at 22:54 No comments:

The Law Commission's consultation on automated vehicles concludes on 8 February 2019.


It is vital that as many experienced personal injury practitioners as possible respond to this detailed consultation.


Although the Commission's terms of reference are largely restricted to advising the government on the regulatory framework for the advanced forms of automated vehicles that are contemplated by the Automated & Electric Vehicles Act 2018, it is clear from the Commission's meticulous consultation paper, including some of the consultation questions (e.g. Questions 6, 7,8 and 12), that it realises that it needs to widen the remit of its research.

It is vitally important that informed professionals draw attention to the fact that the 2018 Act is a missed opportunity.  By failing to address the present and immediate need to reform the liability and insurance framework that applies to semi-automated vehicles that are arriving on our roads in increasing numbers but which are not caught by the no-fault liability provisions of the 2018 Act,  the government has effectively abandoned its responsibilities to accident victims who are ill served by the present inadequacies of the existing civil liability and insurance law framework for conventional vehicles.

I plan to post some of my draft responses to the Law Commission over the next week, to help others form their own view and to encourage others to take the time to respond.

The Law Commission's excellent paper can be accessed here: https://www.lawcom.gov.uk/project/automated-vehicles/ 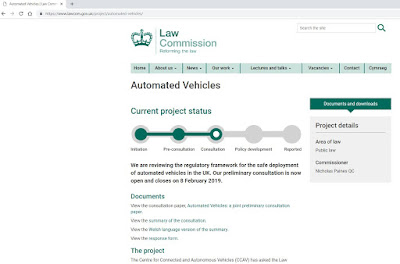 Posted by Dr Nicholas Bevan at 22:32 No comments: