On 15 June in London and 16 June in Manchester

I am delighted to be invited to present my full day of training for MBL again this year. See below for the details.

This course carries 6 CPD points and is APIL accredited.

It will explain the key principles and it will apply them through fun interactive sessions so as to make the training accessible to all levels of fee earner. it will take you through all the practical steps to ensure that your clients recover their full compensatory entitlement: whether from a contractual or statutory RTA insurer, an owner in breach of the statutory duty to insure or from the Motor Insurers Bureau.

Delegates will be left with a clear understanding of the core principles and how to apply and enforce the more generous level of compensatory protection afforded under Community law.

What You Will Learn
This course will cover the following:

Half day's training on Motor Insurance law on 20th March 2015, in Manchester

Last September the Court of Justice for the European Union delivered what is possibly the most important ruling on the true nature, scope and extent of the third party motor insurance requirement imposed under the European directives on motor insurance. The decision in Damijan Vnuk v Zavarovalnica Triglaw exposes fundamental defects in the UK national law provision for safeguarding the compensatory entitlement of motor accidents.

Vnuk has an immediate and retrospective effect which not only extends the geographic and technical scope of third party motor insurance but also opens up new litigation opportunities for victims who have already been wrongly refused or denied compensation either from a motor insurer or the MIB.

This course will cover the following:

All original cutting edge material all this within an amazing 3 hours!  APIL accredited with 3 CPD points.

Posted by Dr Nicholas Bevan at 15:52 No comments:

THE CASE FOR REFORM

Two years have passed since the Department for Transport's abortive review on reforming the Motor Insurance Bureau Agreements.  These are supposed to ensure that the compensatory entitlement of motor accident victims is not jeopardised by the driver at fault being under-insured, having no insurance at all or for failing to stop.

The Motor Insurance Bureau (MIB) is supposed to compensate victims in an equivalent and effective way and to the same level that a victim would expect from a fully insured defendant motorist.  Unfortunately both arrangements as well as the statutory framework for the compulsory third party insurance requirement are badly flawed. Successive minsters have granted the motor insurers numerous concessions that allow insurers and the MIB to reduce or evade liability completely. This undermines the original Parliamentary intention at the time the initial scheme was set up in 1930 and it also defies common sense as it exposes law abiding citizens to the risk of recovering nothing and in the case of serious injury, forcing them to become a burden on their relatives, their local authority and on the State.

The minister's February 2013 consultation was abandoned after his deeply flawed proposals were revealed for what they in the consultation responses.  The minister was reminded that our entire national law provision in this area was riddled with loopholes that favoured motor insurer's commercial interests at the expense of the victims that the various schemes was supposed to protect. He was told that urgent and wide-spread reform was necessary.  More to the point, the minister was advised that the defects conflict with the minimum standards of compensatory safeguards required under European law.

The minister's promised a detailed report that has never materialised, yet he cynically agreed the MIB's request to amend the Untraced Drivers Agreement 2003 within just 4 days of the consultation period expiring in April 2013, to excludes a victim's right to recover property damage unless the victim has been hospitalised for four or more days. This proposal, which was not mentioned in the ministers consultation paper, abolished the right to recovery property damage in an untraced driver claim in all but a tiny minority of cases.  This is inconsistent with European law.

In my article, Changing Gear, published in the Association of Personal Injury Lawyers journal PI Focus, I argue the case for reform and urge personal injury lawyers to undertake an urgent audit of their know-how and case management software as much of our national law provision, including our case law, cannot be taken at face value as it conflicts with superior European law.

Posted by Dr Nicholas Bevan at 10:10 No comments:

I am presenting a full day of training on all aspects of motor liability for the Association of Personal Injury Lawyers on 4 June, 10 June and 12 June. 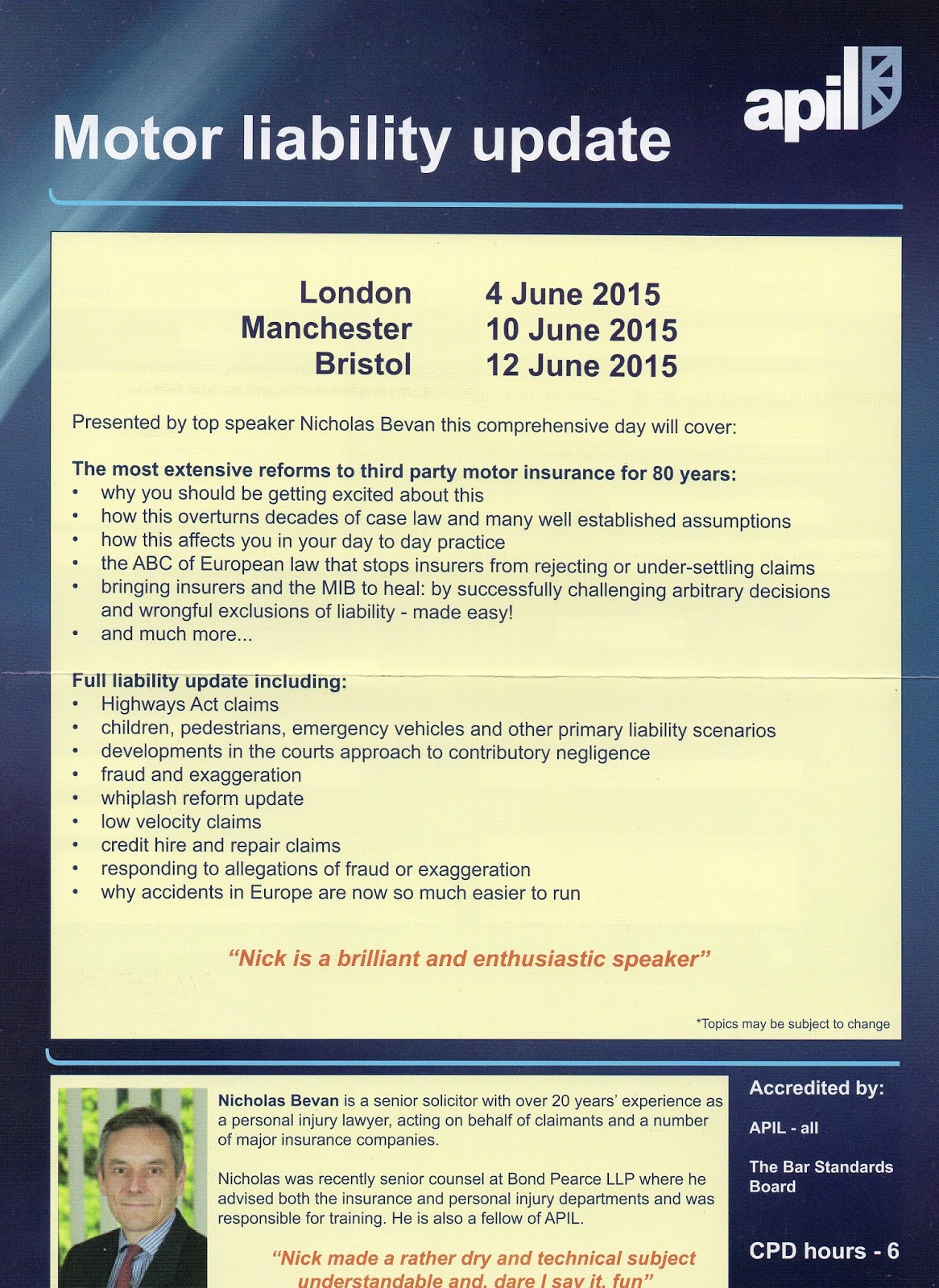 It used to be the case that nothing much happened in motor and road traffic liability law, now the so much has happened and in the process of happening that every text book on the topic is badly out of date.  What we used to term as road traffic practice now involves cutting edge new comparative law, European law , motor insurers liability and its remedies and a host of new and interesting liability and quantum decisions. If you handle any 'rta' claims, this is a course you cannot afford to miss.

Posted by Dr Nicholas Bevan at 11:54 No comments: