THE SUPREME COURT RUING IN CAMERON V LIVERPOOL IS UNJUST 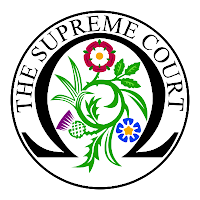 In Cameron v Liverpool  Victoria Insurance the Supreme Court upheld an appeal by a motor insurer (supported by the Motor Insurers’ Bureau as an intervening party) against a Court of Appeal ruling that allowed a personal injury claim to proceed against an unidentified and untraced driver.

In a majority decision, the Court of Appeal permitted Ms Cameron's claim (originally against the registered keeper of the vehicle) to be amended to substitute the keeper, as first defendant, with the unidentified driver responsible for causing the accident.  Permission was also given for the unnamed driver to be identified in the proceedings by a description of the vehicle driven and the accident date, place and time.  The court had also ordered alternative service of the amended proceedings on the vehicle’s insurer and gave judgment against the unnamed driver; noting that the insurer would settle the outstanding judgment.

The Supreme Court based its unanimous decision primarily on time honoured natural justice considerations that require a party to be served with proceedings which enable a party at least the opportunity of being heard by the court.  It ruled that as alternative service on the insurer was unlikely to come  to the defendant’s attention, the claim could not proceed as a civil action.

The justices opined that the claimant’s proper course should have been to apply to the compensatory scheme managed by the Motor Insurers’ Bureau under the terms of the Untraced Drivers Agreement 2003.

This ruling restores a long-established practice that predates the UK’s accession to the European Community whereby all untraced driver claims are processed under the MIB’s Untraced Drivers Agreement schemes.

In my latest New Law Journal feature, I explain why the Supreme Court’s decision fails on its own terms.  I argue that even if one disregards the crucial EU law considerations, the natural justice implications of the court’s decision, on whether to exercise its discretion to authorise the amendment and to permit or waive service of the proceedings, fall heavily in the claimant’s favour.

I contend that the evidence shows that Ms Cameron was the innocent victim of a ‘hit and run’ driver who, after colliding with her car (with enough force to write it off and injure her) then went on to hit a second vehicle, before fleeing the scene.  \I argue that it is inconceivable that the driver was ignorant of the fact that he had at the very least caused some actionable damage.  It is equally implausible to assume that he would not have been aware that had he stopped, he would have been identified and later face a civil action. Therefore, it seems likely (highly probable even) that his act of making-off was intended to evade civil proceedings that could then be readily anticipated (as well as the possibility of criminal proceedings: either for the careless driving or for driving whilst uninsured).  Unfortunately, the Supreme Court thought differently.

Leaving to one side these natural justice considerations, I believe that the Supreme Court’s ruling is fundamentally flawed because the learned justices misinformed themselves about the relevant law.

For example:
Given that the MIB had no legal entitlement or authority to handle these claims under directly applicable EU law, Ms Cameron has been unjustly denied her entitlement by the Supreme Court justices.

I cannot think of another Supreme Court ruling that has got the basic applicable law so badly wrong.

My three-page New Law Journal feature is published in the 15 March 2019 edition, in the Insurance Legal Update section. 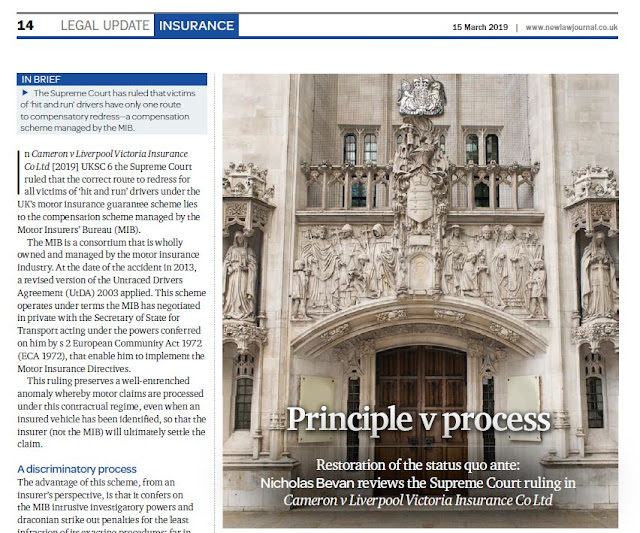 Posted by Dr Nicholas Bevan at 16:41 No comments: