Suing an unnamed driver: by description

The Court of Appeal recently ruled that some victims of hit and run incidents can avoid the disadvantages of presenting a claim under the Untraced Drivers Agreement 2003 by seeking leave from the court for permission join the untraced driver as an unnamed defendant, identified by a suitable description.

In Cameron v Hussain the claimant sought leave to pursue a civil action describe the unnamed defendant driver thus: 'The person unknown driving vehicle registration number Y598 SPS who collided with vehicle registration number KG03 ZIZ on 26th May 2013.’  A majority held that the Civil Procedure Rules did not prevent this.  However, unless the vehicle and its insurers have been identified, it seems highly unlikely that a court would exercise its discretion to grant such an order since it would most probably result in an unrecoverable judgment and so offend the overriding objective as well as waste precious court time and resources.

Accordingly, where the vehicle responsible for the injury or loss can be identified and an insurer is on risk for that vehicle, a claim can proceed against an unnamed driver to judgment, making the vehicle’s insurers statutorily liable to meet the judgment under section 151(5) Road Traffic Act 1988.  The fact that the unidentified driver may not have been an authorised driver, is irrelevant for these purposes since s151(2) (b) Road Traffic Act 1988 nullifies the effect of any authorised use policy restriction or exclusion in this context.

Link to the judgment

Link to Pdf of my lecture slides 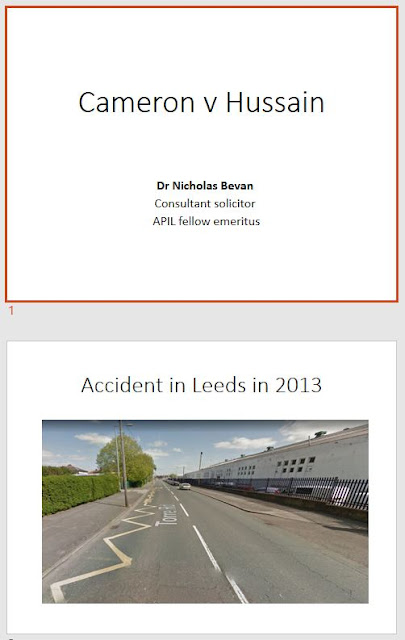 Anyone seeking to contend that full compliance with the more generous level of cover mandated under EC Directive (2009/103/EC) on motor insurance is not possible to deliver through an EU law consistent construction (on the basis that this would go against the grain of Parliament's legislative intent) is advised to read paragraphs 41 to 43.

Posted by Dr Nicholas Bevan at 08:59 No comments: